Tarleton's British Legion of the American War of Independence has always been tagged with notoriety, primarily for actions in the battle of Waxhaws in the southern campaign. It was here that the Legion, and Tarleton himself, were criticized for slaughtering rebel soldiers after they had surrendered. The villainous British Loyalist cavalry officer in the movie The Patriot  (2000), superbly played by Jason Isaacs, was loosely based on Tarleton and I suspect this movie has reinforced the myth surrounding Tarleton and his troops.

Those interested in a more balanced view of the topic should  read Brutal Virtue: The Myth and Reality of Banastre Tarleton (2002) by American, Anthony J. Scotti Jnr.

I've had the mounted corps of the Legion painted up for a number of years and have only recently painted the Legion infantry. Information regarding the infantry uniform is minimal. I decided to base my troops on information found in records in the National Archives at Kew which have the troops wearing white trousers and waistcoats, along with light infantry caps. It's generally accepted that they wore green coats, in keeping with loyalist light infantry units, although some historians argue there is evidence to suggest they may have worn red coats at the battle of Cowpens (where the infantry element of the Legion was destroyed). 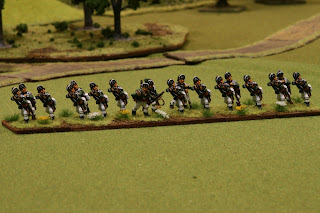 I've used Front Rank British Light Infantry figures to depict my Legion infantry. However, I removed the feather tufts from the caps (except for the officer) to give a more common look. I used Vallejo 'Black Green' for the base of the coat, then dry brushed them with 'Flat Green.' 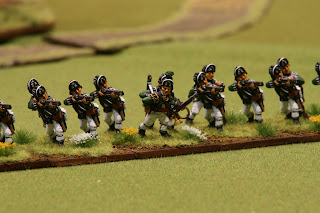 I also decided to add white shoulder lace, as opposed to black shoulder lace that I've seen others use on their Legion infantry. I think this has worked in providing a nice contrast to the dark green and black parts of the uniform, even if it may not be historically correct. Contemporary portraits prove that the officers of the Legion wore gold lace. 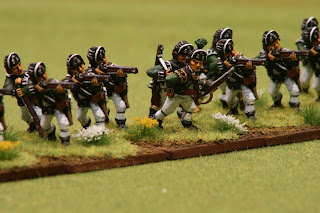 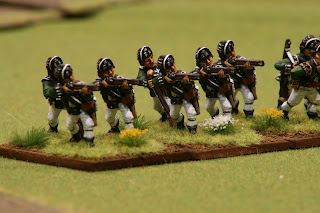 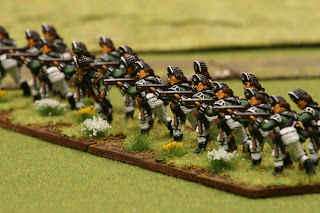 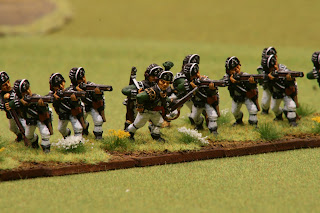 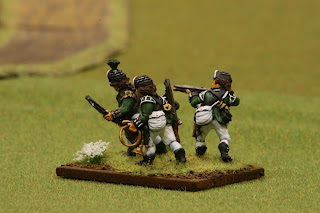 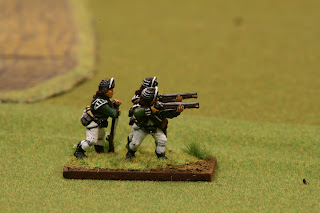 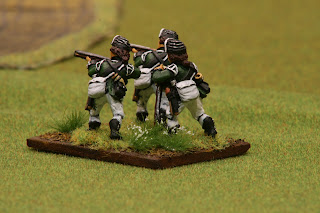 I now only have to paint up a Loyalist infantry battalion (in red coats) and two Hessian infantry units to finally complete my British force....14 years after I started it!