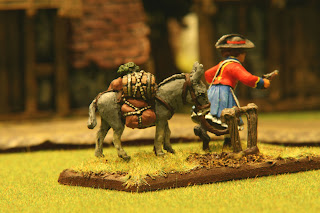 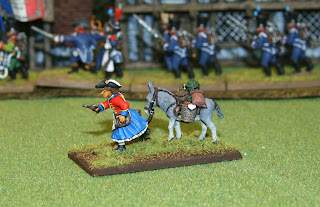 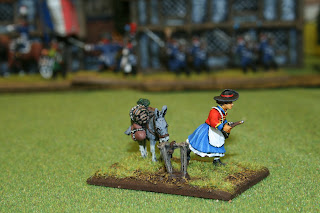 Way back in 1994 when I last visited the UK I had a bit of a spend up at the Guardroom wargaming shop in Dunstable. They specialised in providing ready made armies for those gamers who were starting out building up new metal armies. I had purchased four of these armies when I had been in the UK in 1991 and by 1994 I needed to fill some gaps in these. To that end, the purchases in 1994 included a 12-figure regiment pack of Essex 28mm Napoleonic British Light Dragoons that I needed for my Peninsula project. For 16 years they languished in a box unpainted until last year when I determined to paint them up for a demo game that the Southern Strategists put on at the annual 'Conquest' convention here in Christchurch.

Although another gamer got to command them in their first outing...and I got to fight against them...they performed well. However, at the time they didn't have a standard, which I have recently rectified. Hence, these images were taken recently to celebrate them receiving their new superb GMB standard. 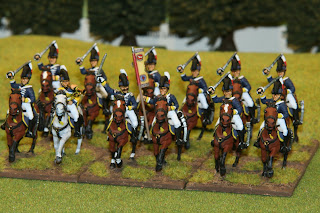 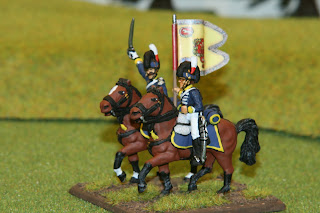 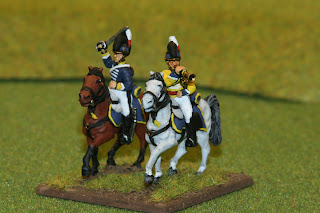 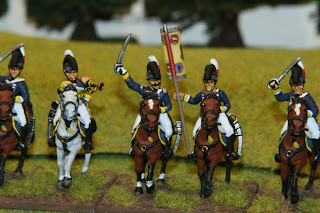 I chose to paint them up as the '12th' mainly because I had access to some colour photos of the 12th Light Dragoon reenactment group to use as references, plus I liked the yellow facings that made a great contrast to the dark blue jackets. I still have a unit each of heavy dragoons and Hussars to paint for the project, but they will probably remain in their packets until next year.

Some followers of this blog may be aware that over the last couple of years I have been researching and writing a PhD thesis on the Officer Corps of the New Zealand Army, covering WW1 and WW2. It has been a great journey so far and along the way I thought that it would be good if somebody wrote an Osprey title covering the NZ forces of this era. When I suggested it to Osprey they asked if I would be interested in doing it. As a result the first title 'The New Zealand Expeditionary Force in World War 1' is due for release in October. A second title 'The NZ Expeditionary Force in WW2' won't be released until early 2013 due to the number of projects Osprey already have pending, but work is already well underway.

Researching and writing the book was certainly a learning experience for me, especially in regard to the various uniform details covering the different corps within the force. I have been fortunate in receiving expert advice and guidance from a number of other NZ military scholars which has ensured the book is more accurate than it would have been without their help. I have also been able to reproduce a large number of photographs that have never been published before which will make this book unique.To top it off, Osprey secured the services of Mike Chappell, an outstanding military illustrator, who has provided the superb colour plates of various uniforms and equipment. 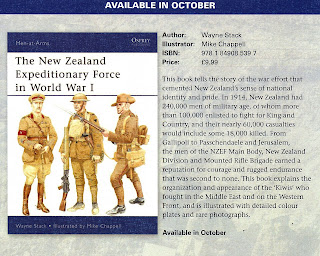 I have a sizable collection of Osprey titles which I have gathered over the years, but I never thought one of them would be one I wrote myself. Although I know all the information inside the book, I can't wait to get a printed copy in my hands.
Posted by Stacky at 01:35 3 comments:

Last week I finished off a unit of Saxon cavalry to complement the two Huscarl war bands that featured in a previous posting. I rushed to get these done for a fortnightly game that Rodger Wood was putting on for the Southern Strategists here in Christchurch. Sadly, I was AWOL for the game due to rugby coaching duties but the fantastic lay-out can be seen on Rodger's blog at http://rebelbarracks.blogspot.com

I found these figures easy to paint and had intended to 'tart' them up a bit by using commercial slide transfers on the shields from Little Big Men Studios. However, I ended up painting them myself so that they would be ready for the game...alas, it wasn't an issue in the end. I intend to use the figure on the grey horse as the overall leader of my Saxon horde. I still have two 'Fyrd' war bands left to paint up but these will have to wait as other projects have priority at the moment. Perhaps I will have to purchase a small contingent of archers to provide some missile firing to soften up the enemy, which I think will complete my small Saxon force. 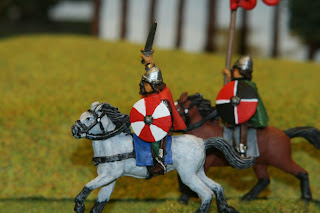 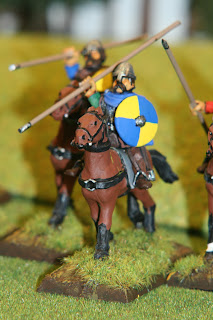 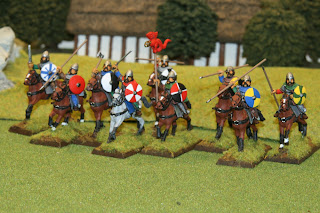 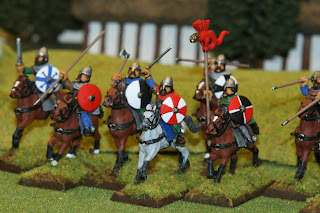 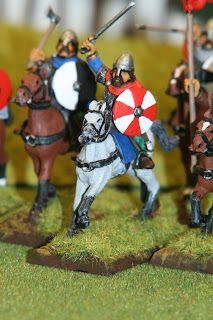 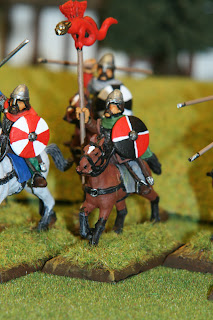 I may have mentioned before that my main interest is in the 'Horse & Musket' periods, and to this end I'm currently working on a Seven Year War project. I'm half way through painting up a British infantry regiment to add to the one I had painted a few years ago. It's been a bit of a drawn out process, being distracted by other projects taken on by the Southern Strategists, but I'm determined to see this through over the next year or so...time will tell.
Posted by Stacky at 21:12 2 comments: