Way back in the early 1990s I travelled throughout the UK and Europe with my then girlfriend and now longer suffering and patient wife. It was during this time that I purchased my first lot of metal figures from the famous wargaming shop, 'The Guardroom' in Dunstable. I'm not sure if it is still operating as a business but I have fond memories of spending an hour or two each time I visited the place, much to my wife's frustration. They specialised in selling ready-made armies covering all periods and scales. It was this marketing ploy that convinced me to visit the shop and spend several thousand NZ dollars (something that is only a dream now that I have a family and mortgage!) buying Napoleonic French and British 25/28 mm armies, as well as Confederate and Union forces for the American Civil War. At the time I had to buy competing armies as I was a solo gamer living hours away from a wargaming club.

All the Napoleonic figures were Essex figures, whose poses seem somewhat dated in 2012, but were fantastic to me back then when all I had previously owned were 1/72 scale plastic figures with limited details to paint. After spending so much money purchasing my new metal warriors, I went even further in paying someone else to paint and base them for me....something I would never consider now. They were based with balsa wood which proved too weak to sustain the battering my armies got in the September 2010 7.1 magnitude earthquake that struck Christchurch. The silver lining to this event was that I was forced to re-base the troops on MDF stands that should last the distance. 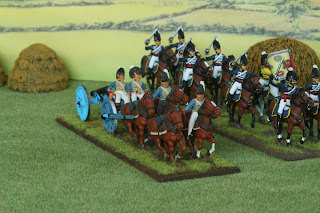 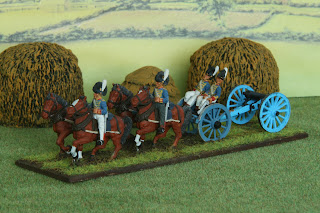 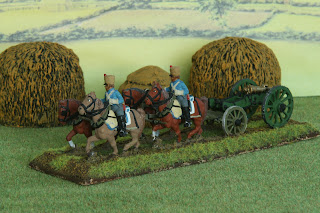 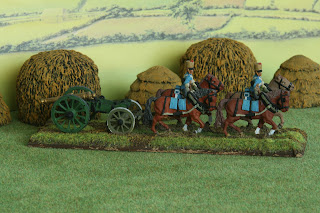 Over the festive season I finally got around to re-basing the horse artillery stands for both the French and British. I had to do a bit of touching up with the paint work and had some trouble matching the colours...but I'm not too worried about the end result. I didn't have any spare British artillery pieces to attach to the limbers, so I've used spare ACW cannons instead....not ideal but only the purists would notice.
Posted by Stacky at 23:40 3 comments: