I'm a bit late posting the photos of these freshly painted Jacobite units as they have already seen action twice over the last few weeks; first in a practice game at the Mess leading up to our demo game at Conquest, and then at Conquest last weekend. Photos taken of this game by Rodger Wood can be viewed on our Southern Strategists blog:  www.southern-strategists.blogspot.com 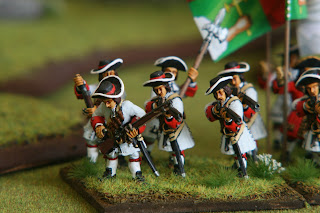 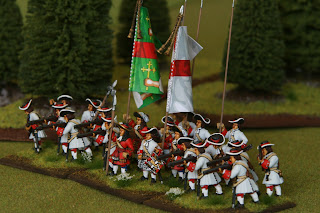 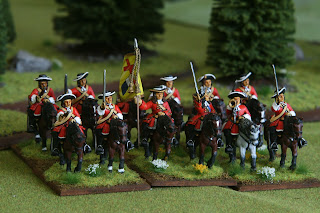 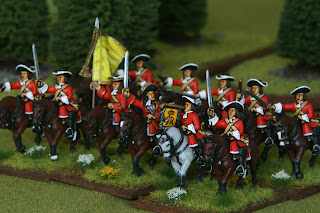 In honour of the family heritage of my 98 year-old grandmother who died last week, I thought it an appropriate time to post some images of my recently painted Irish Jacobite senior command stands. My grandmother's paternal grandparents were Irish Catholic farmers from County Tipperary who immigrated to New Zealand in the 1870s. 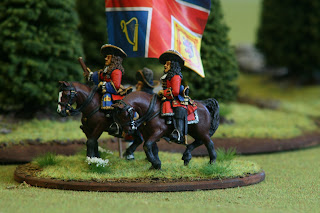 I finished off James ll's Irish Foot Guards a few weeks back but I just got around to photographing them. These are the first of my foot regiments for my Irish Jacobite army and I have another three to paint up before the demo game at Conquest, Christchurch, in late October. I'm halfway through painting Antrim's regiment (in white/grey coats) and I've also started another horse regiment (Tyrconnel's). I thought I would have a few more units done by now, but never mind, I'm sure the other Southern Strategists will be progressing their painting to ensure we have enough units for a decent game...fingers crossed! 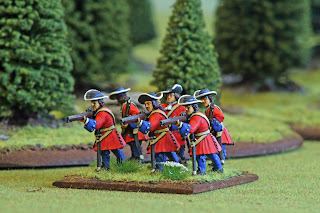 And now for something completely different ! - Part 3


I had no intention of having a part 3 regarding the expedition to Oamaru, but somehow the photo of the fantastic estate barn disappeared when I published part 2. Never mind, I'll put that down to driver error on my part.

And now for something completely different ! - Part 2

Apologies, but until now, real life has got in the way of posting the second part of my expedition to the Oamaru Steampunk Festival last Queen's Birthday weekend. Apart from the fun of exploring the historical Victorian quarter of Oamaru, while admiring the imagination of those who put together some incredible Steampunk costumes, my final day there also provided a bit of a lesson in New Zealand colonial history.

The ornate architecture of the limestone-facade Victorian buildings with their Etruscan columns along the main street of the town, as well as the warehouses near the port, remain proof of the wealth and opulence within Otago society during the colonial era of the 19th century. This wealth initially came through the Otago gold rushes of the 1860s, but was cemented through the development of pastoral agriculture based on sheep. There were a number of large sheep stations surrounding Oamaru, where the run-holders became rich on wool production, and later by the refrigerated export of sheep meat to Britain.

One such rich run-holder was Joseph Cowie Nichols (a.k.a. Cowie Nichols CBE), who in 1885 bought the 12,545 hectare Kuriheka Station inland from Maheno, just south of Oamaru. Although born in the colonies, like many New Zealanders of the landed-gentry class at the time, Nichols was sent to England for his formal education where he studied at Oxford.

On his return he settled into the life of a gentleman farmer and community leader, which saw him serve as an officer in the NZ Volunteer Force. By 1914 he was lieutenant-colonel in command of the 5th (Otago Hussars) Mounted Rifles. The badge that this regiment adopted and wore overseas during the First World War includes a shield of the Nichols family coat-of-arms in the centre. However, Nichols was considered too old for overseas service at the time and he remained in New Zealand in command of the Territorial troops of the Otago province.

After the war Nichols built a substantial memorial to the 83 'servants' from the Kuriheka estate who served overseas during the Great War, which included 21 who were either killed or died during the conflict. Nichols' own son (with the same name) was killed while serving as a rifleman in the Canterbury Infantry Regiment on the Western Front in October 1916 and is included on the memorial. The memorial is surrounded by a number of field artillery pieces from the colonial era and the First World, including captured German Krupp field guns and trench mortars. Somewhere along the way Nichols also acquired two 64-pounder rifled muzzle loading coastal defence guns that had previously been part of the Taiaroa Head defences. These guns have been placed in an open field at the entrance of the estate, which is open to the public.

Although located in the back-blocks on rural New Zealand, I almost felt that I could have been visiting a manor house estate in England or Scotland from the style of the buildings. These were all built from limestone blocks in the neo-baronial style, including a substantial barn that has Gothic windows. Very impressive and a statement of wealth and achievement, which I'm sure was the intention when first built.

We couldn't travel to Oamaru without a visit to this iconic location, only a 20 minute ride in the car from the seaside port town. Hence, the New Munster Steam Fusiliers took the photographic opportunity to record our visit for prosperity. I highly recommend a visiting Kuriheka if you get a chance. 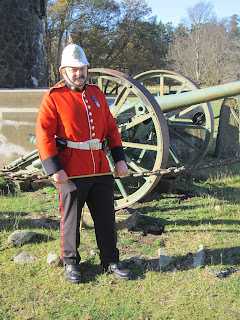 Normal wargaming service will now resume.
Until next time!
Posted by Stacky at 23:20 1 comment:

And now for something completely different! - Part 1

Turning 50 can make people do some strange and unusual things. When I reached a half century earlier this year I promised myself, that instead of just celebrating on my birthday, that I would make it a year of celebration by doing out-of-the-ordinary things. To this end I committed myself to attending the annual Queen's Birthday Weekend Steampunk Festival in Oamaru. Fellow Southern Strategist, Gavin Bowden (a.k.a Ogilvie VC in wargaming blogging circles), had taken part in this event on several occasions and convinced me that we could have a great weekend at the event dressed as Victorian era officers while also taking in the military sites of interest in Otago . To be honest, at the time I knew nothing about Steampunk and was only interested in the historical side of the trip. For the multitudes of those who know nothing of Steampunk, it's kind of like living history Victorian Science Fiction....inspired by the writings of Jules Verne, H.G. Wells, Sir Arthur Conan-Doyle and all those other Edwardian types who never lost their childhood imaginations.

I already had a collection of New Zealand militaria items that I could use, which included a white Foreign Service helmet sporting an original NZ Volunteers helmet plate and spike from the 1890s (purchased way back in my youth when I had no mortgage, wife or kids). What I lacked was a red tunic that fitted me. I had acquired a NZ Army Band tunic about 15 years ago, but for some strange reason it appeared to have shrunk over that time. Gavin came to the rescue when he discovered two large fitting Chelsea Pensioner coats at a local army surplus store. So, a few hundred dollars later and with some alterations from Jane, our very talented regimental seamstress, we were able to achieve the look we wanted.

One aspect of Steampunk is that you are encouraged to create a character to go along with the costume. Gavin had already established himself as Captain Reginald Ogilvie VC (with associated blog). With the Victorian theme in mind I came up with Major Septimus Sherlock-Brown of the New Munster Steam Fusiliers, late of the Kawatiri Field Force and mentioned in dispatches for lack of action in the Upper Buller Gorge. I got the name Septimus from a character from a Sharpe movie, while the double-barrel surname came from my maternal grandparents family names. I suggested to Gavin that we use 'New Munster' as a regimental name as this was the original name given to the South Island of New Zealand, while he came up with 'Steam Fusiliers'. Kawatiri is the Maori name for the Buller district where I originally hail from,while the use of the Buller Gorge added a hint of North West Frontier-type action celebrated in British Army history.


The weekend began with a 4.5 hour drive south to Dunedin to visit the fully restored gun emplacement at Taiaroa Head. Built in the 1880s at the height of the Russian invasion scare, the crowning jewel in the defensive position at the entrance to the Otago harbour mouth is the 6 inch breech-loading Armstrong disappearing gun, concealed within a earth parapet on an old Maori pa site on a hill. Cutting edge technology at the time it was installed in 1889, the gun was able to fire and disappear back into the gun pit below the surface so that the enemy ships had difficulty in destroying it. The gun had a range of 5 miles and a rate of fire of 1 round per minute. The barrel weighs 5 tonne and has a length of 17 feet 6 inches. The gun was raised through a pumped water and air ram system. On firing, the ram system was re-compressed as the gun recoiled into the gun pit for reloading. Advances in technology made the gun virtually obsolete by 1912 but it was still in operation until after the Second World War. It had a crew of 10 personnel and was fed from an ammunition magazine bunker below the gun. A very impressive piece of kit and well worth a visit if you find yourself in Dunedin with a couple of hours to spare.

Inspired by some terrain pieces made by local gamers here in Christchurch, I decided to have a crack at improving on the woodland terrain pieces I made earlier in the year. My first go at doing this involved using Woodland Scenics trees purchased from a local model shop. These turned out ok, but I ended up having to use super glue to permanently attach the foliage. One of the other Southern Strategists (Geoff Martin) suggested a cheaper and less messy option which involved buying bulk bags of ready-made trees from our local Christmas shop. These trees came in various sizes and were perfect for what I had in mind. 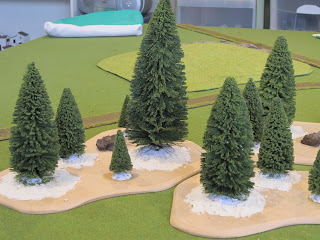 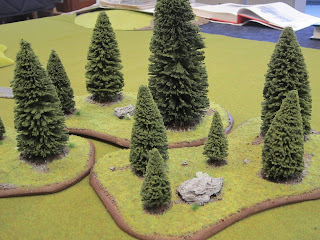