Expert blogger, fellow wargamer and Fusilier General, Roly Hermans, kindly offered to help in modifying my original header to the superb item that now proudly introduces this blog. This was much appreciated and it certainly enhances what I had previous constructed.
I have also finally settled on the background picture that was proving elusive. It's a map of the battlefield of Waterloo, although most of it is covered with the body of the blog. However, I reckon the map gives the blog a military feel. It's still a work in progress but I'm feeling a certain satisfaction from what it is looking like so far.
I'm hosting the first official game at the Mess tonight (15mm Volley & Bayonet Zulu War) so I hope to have a few images of the game on the blog in the following days.  Beers are in the fridge, so it's off to Mrs Miggin's Pie Shop for the light supper!

Before and after the quake 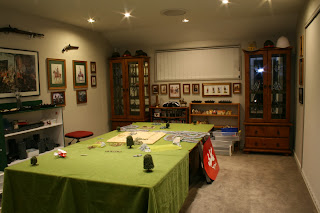 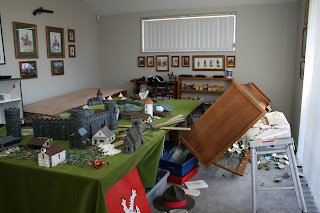 I only had the display cabinets a couple of weeks before the quake made short work of them. I've added some before and after photos to convince others to secure their cabinets and book shelves to the wall so that this doesn't happen to you. The people of Christchurch had no idea that their city was built on a fault line.....but they certainly do now!
Posted by Stacky at 00:12 No comments:

After years of following blogs of other wargamers, I thought it was about time that I put one together myself. I've enjoyed seeing what gamers around the world are achieving with their painting, terrain and games and thought having my own blog would be a record of what I've managed to put together.
When building a new house I managed to convince my wife that a games room was essential to marital bliss...as well as providing a place for father and son bonding. She wasn't totally convinced but thought wargaming was cheaper than gambling on the horses and it would keep me home from the pub! Well, I seldom put a bet on anyway and I still get to the pub, so I figure I'm a winner either way.

We've been in the new place over a year now and I still haven't had a wargame in the 'Mess.' I chose this name for the room as a play on words....it has a military theme and for many months it was a mess, especially after experiencing a 7.1 magnitude earthquake here in Christchurch in September 2010. The two new glass display cabinets with all my painted figures in came crashing down, spilling out the figures and breaking up stands. Thankfully, I didn't lose too many bayonets, but I'm only now getting my battalions and regiments refitted to fight another day.

My main periods of interest are those of the horse and musket era, ranging from the Seven Years War through to the American Civil War. However, of recent times I've succumbed to the pressure from others to delve into the English Civil War, World War 1, Napoleonic Naval and more recently the Dark Ages. Most of my figures are 28mm although I do have some SYW and Franco-Prussian War 15mm armies.

I've been a member of the Southern Strategists Historical Gaming Group for the last 13 years and I'm also a member of the Friday Night Fusiliers Wargaming forum. Now that I have my own games room I hope to get stuck into painting units from my lead mountain and have a go at recreating miniature campaigns...either with others or solo efforts. So, I hope that others will be interested in what I put on this blog over the next few months and years...and I look forward to receiving any comments you wish to makes.

Stacky
Posted by Stacky at 21:17 No comments: