Things have been a bit quiet in the Mess of late as we spent all of July sweltering in the heat wave in the UK, Ireland and Europe. The main purpose of our travel to the northern hemisphere was to attend a clan gathering in County Kerry, Ireland. But as we had our teenage daughter travelling with us, we thought we had better show her the obligatory tourist sites, so it was off to London, Paris, Rome, Florence and Pisa before we eventually got to the Emerald Isle. During this time I managed to get along to a few military museums and castles while the girls went shopping, so I intend to add a few photos of military interest in the next few posts that I've found inspiring for my wargaming projects.
As a little 'side project,' I've painted a few extra figures this month for my burgeoning Scots Border Reiver clan. These figures are by Graven Images and purchased through Hoka Hey Miniatures (www.timelineminiatures.co.uk). The 15th century tower-house castles that we visited in Ireland were basically built along the same lines as those on the Scottish border, so I suppose I can claim the trip to Ireland as wargaming research for building a model Pele Tower. If only I could claim a tax rebate for it. 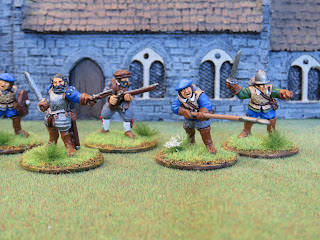 The next phase of this little project will be to purchase and paint some mounted reivers. At this stage I'm looking at using Perry Miniatures English Civil War Scots lancers and Moss Troopers, and with Fathers Day coming up in New Zealand in September perhaps I should buy these as a present on line soon to avoid getting socks instead.