Well, I've finally finished painting up the newest unit in my SYW/ FIW British force...although it's taken me since Christmas to do it. This green-faced regiment represents the 24th Foot (Cornwallis's) which fought in the battle of Minden in 1759. Although the GMB flags I've used are correct for the 24th Foot, I will probably use this unit of Front Rank figures as a generic green-faced regiment for any other theatre or campaign where the 24th did not serve, such as the French and Indian War in American. The thought of painting all the white lace gave me a mental block in finishing the unit sooner, but sometimes you just have to box on by painting a small  number of figures at one time. The purists among you will also note that my positioning of the flags is not historically correct as the Union Jack should be on the right. Many years ago when building my AWI British army I mistakenly placed the Union Jack on the left in the very first unit I painted, and being too lazy to change it, now all my British units have the standards in this configuration. I also had a problem with a bit of 'frosting' when I sprayed the figures with Army Painter matt varnish. I had never struck this before, but I put it down to 'driver error' on my part by not giving it enough time to dry before spraying a second coat. 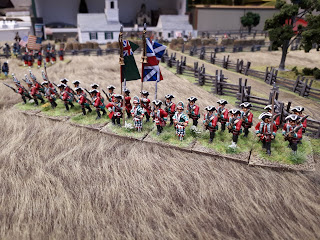 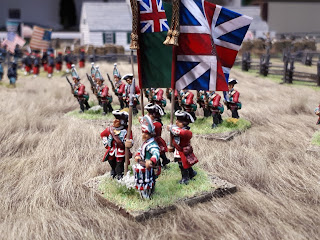 I'm now painting up a French infantry battalion, which is far easier and quicker to paint...so hopefully it won't take me 6 months to finish like it did these blokes!