Although 'Horse & Musket' is my favourite period, somehow I managed to allow myself to be convinced by several of the Southern Strategist boys to delve into the Dark Ages. I'm not sure how this happened but their argument that I wouldn't have to paint a whole army...only 2 or 3 warbands...may have clinched the deal. The other blokes had already bought a horde of 28mm Renegade figures, so I followed suit. To be quite honest, it was fairly painless buying the few figures that I needed as Renegade remain some of the cheapest 28mm metal figures on the market.
As usual, I ended up buying more figures than I had originally intended. However, they were quick and easy to paint compared to Napoleonic or Lace Wars battalions that I'm use to. The agreed size of the warbands was only 12 figures per unit, so I decided to initially paint up two units to begin with. The most fun was had deciding on the shield designs, which I painted myself in the end after initially toying with the idea of buying the superb slide transfers from Little Big Men Studios. I'm sure they would have enhanced the end result but I took the cheaper option.
In the past I have painted in the eyes of my figures, but now rely on washes to bring out the facial features. This technique works well with finely sculpted figures, such as Front Rank, but Renegade are not as defined which gave a less than desirable result. That said, Renegade figures are robust and solid, which I like...and competitively priced as well. 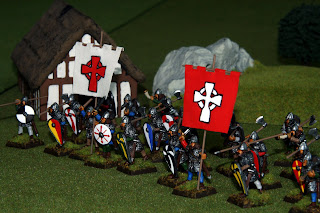 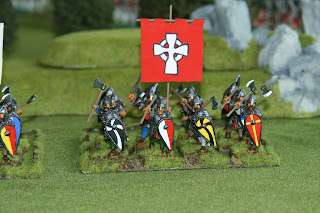 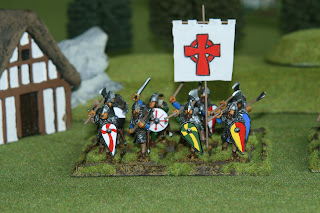 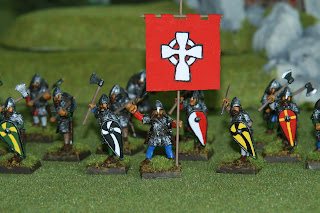 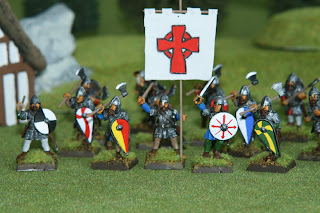 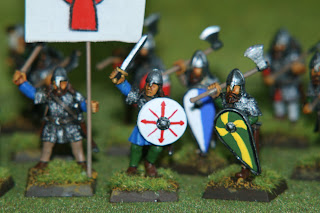 This project also gave me an opportunity to attempt to make my own cloth banners. I had read several articles where gamers had used cotton cloth to make flags, so I thought I would give it a go. I thought I would keep it simple to begin with by tracing the outline of Celtic crosses on the pieces of cloth that I had cut out...then I painted the whole piece with watered down PVA glue to stiffen it. This was followed by adding the colours using Vallejo acrylics. The banners were then glued to cross standards that I put together using florist wire. A fairly average result but I intend to be a bit more adventurous when I paint up the mounted troops and two units of Saxon fyrd that are still in their packets. The figures were based for skirmish games but I painted and flocked a couple of Citadel unit bases to move the unit around when they are to be used in large battles.
Posted by Stacky at 02:04