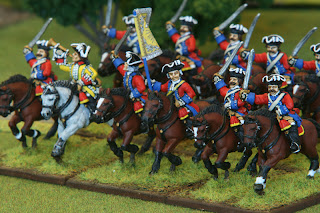 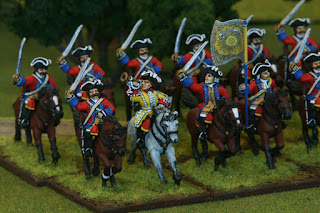 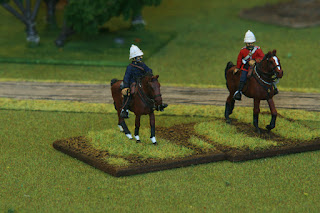 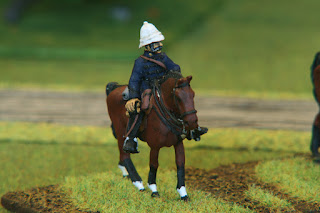 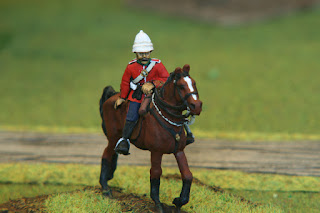 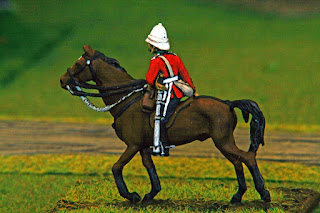 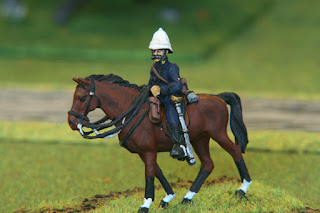 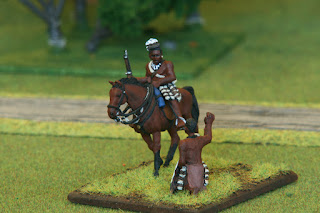 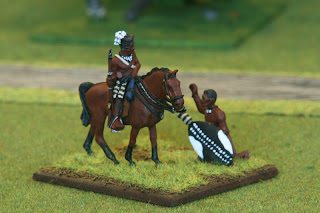 I've also included a couple of snapshots of several Zulu War commanders that have been half painted for over 12 months and finally finished off last month. These are from the outstanding Empress Miniatures range. Unfortunately the close-up photos have exposed a need for a bit of touch-up paint work.
Posted by Stacky at 20:09 9 comments: 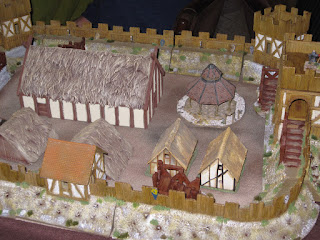 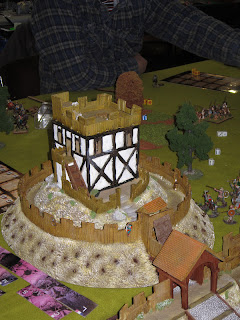 Well, it's been a few months since I last posted on the blog. In that time I have submitted my PhD thesis on the Officer Corps of the New Zealand army from 1909 to 1945, as well as finishing off the manuscript for my second Osprey Men-at-Arms title, 'The 2nd New Zealand Expeditionary Force in World War 2.' I'm still waiting for the thesis to be examined, while the Osprey book is due for release in February 2013.

Now that they are out of the way I can concentrate on some of my wargaming projects that are in need of attention.

Several weeks ago my 11-year-old son, Seamus, and I, along with most of the other Southern Strategists, took part in the Borodino refight held at the Cavaliers Wargaming Club here in Christchurch. This game was the biggest 28mm game held in New Zealand for many years (if ever), which involved over 25 participants, around 4,500 infantry figures, 1,100 cavalry figures and about 160 artillery pieces. The event was truly spectacular, with the fraternal spirit of the gamers ensuring that everybody had an enjoyable time and that there was no unnecessary over-competitive behaviour that can spoil competition games.

Unfortunately due to sporting commitments we were only able to attend the first day of the game, but felt privileged to do so. Seamus and I were part of the Grande Armee, and together we commanded a division under Prince Eugene (Kent Galpin) on the left flank....although to be honest I didn't command much as Seamus was throwing so well with the dice that I took a back seat to proceedings. In fact, Seamus should have been awarded the Legion d'Honour for the fight he put up against the mass of Russian cavalry that threatened to outflank the French left flank. Eventually our division was destroyed and the other commanders (Rodger Wood and Kent) ably plugged the gap with reinforcements that held the ground until the end of the battle.


I've attached some images of the first day of fighting, including my freshly painted regiment of chasseurs a cheval, which managed to blunt a Russian attack before being destroyed....c'est la guerre! There is a series of videos taken of the event placed on Youtube, while more photos of the game can be seen on Rodger's 'Rebel Barracks' blog.

The event was such a success that next year a similar size game is to be held in honour of the 150th anniversary of Gettysburg...can't wait.

In the mean time I'm working on building up my British and French Seven Years War armies, adding units to my AWI and Napoleonic forces....and perhaps finally finishing off the 28mm brigantine that I've been putting together for over 12 months....we'll see.
Posted by Stacky at 20:39 1 comment:

Email ThisBlogThis!Share to TwitterShare to FacebookShare to Pinterest
Labels: Napoleonics 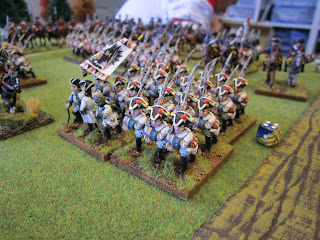